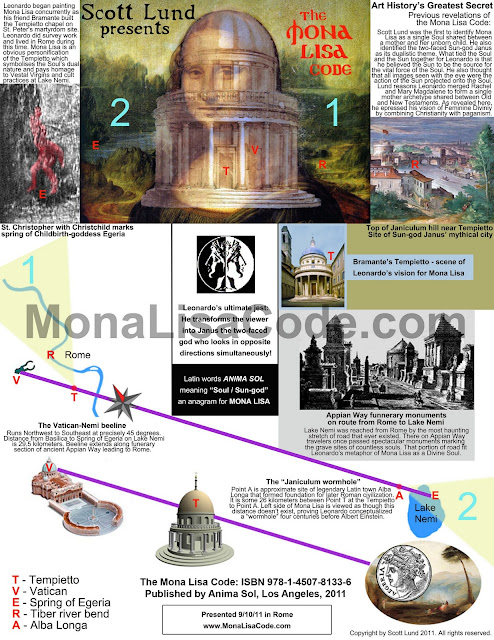 The greatest secret in art history was declared by Scott Lund in Rome on the date 9/10/11. It was revealed to be an ingenious optical trick that Leonardo da Vinci used to transform the viewer of the Mona Lisa into the pagan Sun god Janus who looks in opposite directions simultaneously.

The Los Angeles investigative writer briefly addressed a crowd of people gathered near the ancient Colosseum, then led them to the tune of a bagpiper across the Tiber river to the top of the Janiculum hill named after the two-faced Sun god. There he identified the Tempietto of Bramante as the site where Leonardo had his vision for the world's most famous work of art. Lund states that the Mona Lisa is a personification of the elegant circular chapel built by Donato Bramante at the presumed location of the mythical citadel occupied by Janus at the beginning of Italian civilization.

“The Mona Lisa's landscape is not a fantasy, but a precise survey map of Rome and its vicinity. The survey cleverly defines the two extremes of religion, marking the center of Christianity on the right side, and the center of paganism on the left. The dome of St. Peter's Basilica at the Vatican is one end of the survey, and the site of the cult practices of the goddess Diana at Lake Nemi is the other. A line between the two endpoints, 29.5 km apart, intersects the Tempietto of Bramante,” says Lund.

“Lake Nemi was the cradle of European witchcraft, and its location on the Mona Lisa was dangerously heretical during the Renaissance period. Using the pagan god Janus as the theme for the painting also implied Leonardo's heretical conviction that the sun was the center of the Universe,” he says.

In his book the “Mona Lisa Code,” Lund identifies the central figure of the Mona Lisa as a single soul shared between an expectant mother and her unborn male child. The dualistic theme of Janus is symbolized by the partial pillars on either side of the painting, and the god is also identified by the code words ANIMA SOL, which is a secret anagram for the name Mona Lisa, meaning “Soul/Sun god” in Latin.

“What tied the soul and the sun together for Leonardo is that he believed the sun to be the source for the vital force of the soul,” says Lund, “Leonardo also believed that all images, including the Mona Lisa, were the result of the sun being projected onto the soul at the back of the eye.”

“Leonardo was extremely logical, and the method of his genius is that he always sought out logical extremes. The opposite faces of Janus uniquely portrayed the metaphor of a land survey, which requires the connection of a straight line between two points,” says Lund.

According to Lund, Leonardo worked with Bramante at the court of Milan until 1499 when an invading French army sent their Sforza patron fleeing the city. The two friends then sought safety and new opportunities in Rome, which was preparing for its Grand Jubilee of 1500. The Mona Lisa was begun in conjunction with the groundbreaking of Bramante's Tempietto in 1502, at a time when Leonardo was known to have been in Rome. Their complementary projects were intended to symbolize the religious doctrine of the “two faces of the soul.”

Lund says that the radical stereoscopic illusion Leonardo crafted into the Mona Lisa exceeds the imagination of any Hollywood movie script writer. Billions of people have viewed the painting without suspecting the ingenious Janus-faced perspective that the grand master had placed them in.

For more information go to: www.MonaLisaCode.com

The most conclusive evidence of a secret code hidden in the Mona Lisa will be revealed on September 10 at 3 p.m. in the public square near the Colosseum and the Arch of Constantine in Rome. At that time Los Angeles mystery solver Scott Lund will lead a large gathering of people and international news media from the square to the actual place where Leonardo da Vinci envisioned history's most famous work of art.

"The Mona Lisa has been misunderstood for nearly 500 years. Now it's time to know what has remained concealed for so long,” says Lund. Because his proof involves precise measurements found within the landscape of the painting itself, Lund is certain that his dramatic and unconventional demonstration will provide proof beyond any reasonable doubt.

"Contrary to accepted belief, the landscape of the Mona Lisa is not a fantasy. It is an incredible survey map that indicates a startling mix of Christianity and paganism. The world has never been closer to knowing the mind of Leonardo da Vinci than the date of 9/10/11 when we meet in the heart of Rome for this great discovery," says Lund.

Those who attend the historic event may be acknowledged by name as witnesses to the Mona Lisa Code in Lund's book, and any photographs or video they record could be included in his upcoming film documentary.

Posted by Mona Lisa Code at 2:12 AM No comments:

MONA LISA WAS PAINTED IN ROME

LOS ANGELES, CA - August 27, 2011 -- “There is an incredible secret hidden in plain sight on the Mona Lisa that shows Leonardo da Vinci had more imagination than any Hollywood script writer," says Scott Lund, a Los Angeles author who has unraveled an elaborate code crafted into the iconic Renaissance painting.

“Leonardo started painting the Mona Lisa in Rome before the date of 1503 accepted by historians, and I know where he painted it,” says Lund, who is presenting his findings on September 10, at 3 p.m. in the public square near the Colosseum in the heart of Rome.

Leonardo left Milan in 1499 after an invasion by the King of France sent its ruling Sforza family fleeing the city. Rather than settling in Florence as is generally believed, Lund says Leonardo then sought safety and new patrons in Rome, which was preparing for its grand Jubilee of 1500.

"There is a rich matrix of symbolic meaning that Leonardo created in the Mona Lisa that I have already exposed, but there is also one unique and startling element in the painting that I have saved for my dramatic presentation on 9/10/11. The "Mona Lisa Code" will essentially change everything that has been erroneously assumed for nearly five centuries," says Lund, who considers his discovery a gift that the citizens of Rome can share with the rest of the world.

Lund intends to show a large group of people the actual site where Leonardo painted his masterpiece. The historic event will be covered by international news media and filmed for the benefit of posterity.

For more information go to www.MonaLisaCode.com

Mona Lisa to be 'gifted' to Roman citizens

LOS ANGELES, CA - August 15, 2011 --  “The idea that the Mona Lisa was painted in Florence is the biggest red herring in art history,” says Scott Lund, an investigative writer who claims he can prove a silk merchant's wife living there was not the subject of Leonardo da Vinci's masterpiece.

Leonardo left Milan in 1499 after an invasion by the King of France sent its ruling Sforza family fleeing the city. Rather than settling in Florence as is generally believed, Lund says Leonardo then sought safety and new patrons in Rome, which was preparing for its grand Jubilee of 1500.

“Leonardo started painting the Mona Lisa in Rome before the date of 1503 accepted by historians,” says Lund. “And I know where he painted it!”

The Los Angeles-based author of the "Mona Lisa Code" is presenting Leonardo's startling secret on Saturday, September 10, at 3 p.m. in the public square near the Colosseum in Rome. The historic event will be covered by international news media and filmed for the benefit of posterity.

Lund's revelation occurs ironically 100 years after the Mona Lisa was stolen from the Louvre by a thief who wanted to return it to Florence. He believes that solving the greatest mystery in art history is a gift to the citizens of Rome that they can share proudly with all Italians.

“I realize that there are a lot of people in Florence who will be disappointed by my findings, but the Mona Lisa has nothing to do with their wonderful city. It is the Romans who are the true heirs to Leonardo's iconic creation, and I intend to prove it on 9/10/11,” says Lund. 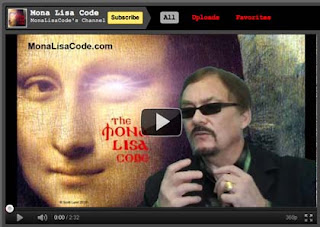